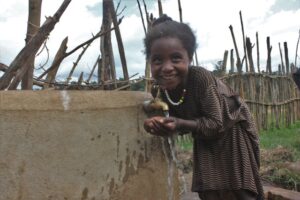 Excitement and anticipation were felt from near and far as finalizations of construction and training are completed! A lot of work goes into this phase to ensure that the long term health of the community is sustained and thriving.

Of course, completing construction included finishing the 2 water points, 2 single taps, the reservoir, and all the pipelines. Additionally, organizing a 7-member WaSH committee and providing a full set of hand tools and training for local caretakers and technicians will ensure the long term success of the work done.

Finally, training and education is done for 1,719 Waraba community members. This important element requires multi-sector involvement from health extension workers, teachers, development agent workers, and beyond. The WaSH committee receives the most extensive training on hygiene and sanitation, so they can take ownership of the training and educational needs of the community moving forward. They are also trained on the overall management of the system (software and hardware), to ensure effective maintenance is completed. 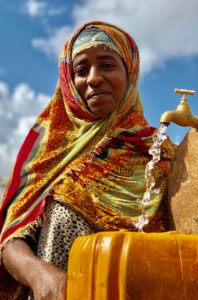 Handing over the project to local government and community members is a time that truly inspires the community and in fact strengthens the bond between the community members and the partners involved, such as Run for Water and Imagine1Day. The optimism that permeated Waraba from this first foundational building block being completed has led to the initiation of other developments with a promising commitment level, a sense of ownership and pride, and an increased culture of engagement for development throughout the community. 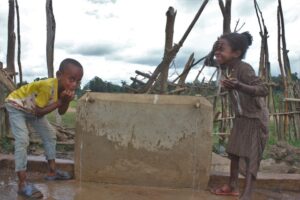 Peg shared that the biggest shift he witnessed happened when he stood beside their spiritual leader and asked him what clean water meant to his community.  He looked at the ground for a few seconds and then lifted his head high and said that because of the access to clean water high school-aged girls no longer had to walk for hours and so they would be freed to attend school rather than get married at age 15. They now had options. The women and girls gathered there stood to their feet and erupted in a massive cheer and clapping and singing. Never before in their history had girls been given this option. They had been slaves to walking for water. Things were about to change forever….all because of water.

Nothing can share the LIVE experience better than this heartfelt video with Peg Peters, President of Run for Water, live in Waraba, Ethiopia, with the community to celebrate fresh, clear water!

Waraba is an amazing example of the kind of transformation that happens when water comes to a remote village…opportunity, freedom, choice, hope, and life.

As this project wraps up, we realize it is not completed…but really only just beginning. Bringing water to Waraba will forever change the lives of many, and as we keep in touch with the community members we all look forward to the stories shared about the amazing people of Waraba. 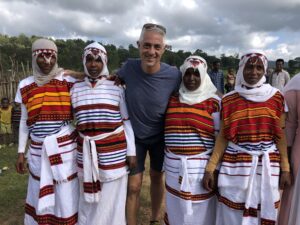 As he stood there in the middle of the village of Waraba, Ethiopia with over 1000 people gathered he shared how amazed he was at what the community was able to accomplish with just a little investment.  They had managed to build a gravity-fed water system with the help of local engineers and experts. They had worked really hard to fundraise and contribute their 10% to the project. They were now gathered together to celebrate what they had accomplished together. This was going to be the start of something new for them.

Nothing can share the LIVE experience better than this heartfelt video with Peg Peters, President of Run for Water, live in Waraba, Ethiopia, with the community to celebrate fresh, clear water! 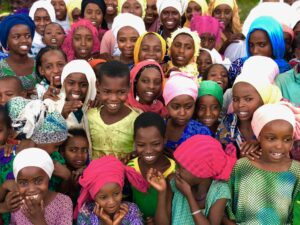 There had been a natural spring that needed to be capped to prevent bacteria from getting into the water. Now with the spring capped they were able to pipe water to the local mosque, the school, the medical clinics and into the middle of the village.  The Imam (spiritual leader) told Peg that clean water close to the mosque was so important because it allowed for the people to wash ceremonially before prayer. Peg was then told by the local medical officer that for the first time in their village mothers could now deliver their babies and have them washed with clean water. The infant mortality rate hit zero for the first time in as long as he could remember. Babies can die from water-borne infections within the first six months. This has been eradicated because of now having access to clean water. Mothers and daughters no longer had to walk for two hours to find water that was full of bacteria and disease.

See the full story on our GiveTrack campaign page.